Bring Your Friends for an Action-Packed Experience!

For group events and special occasions, we can provide off-hours play - just call us and we will do our best to accommodate your needs.

We are dedicated to providing the best paintball experience experience at an incredible value. For the best price, bring your crew and get group ticket rates!

CALL US for our SPECIAL PROMOS! – we run new ones every month!

If you have your own equipment you only pay the entry fee and the paint.

We offer specially-priced group tickets, up to 50% off in discounts! We offer paintball discounts for students, military personnel, church groups, bachelor parties, and birthday parties. For detailed information, prices and tickets, please go to the DISCOUNTS section

Includes all day air (HPA only). WE ARE A FIELD PAINT ONLY (FPO). No outside paint allowed

We have a massive selection of games to choose from to add more excitement and enhance your paintball experience! 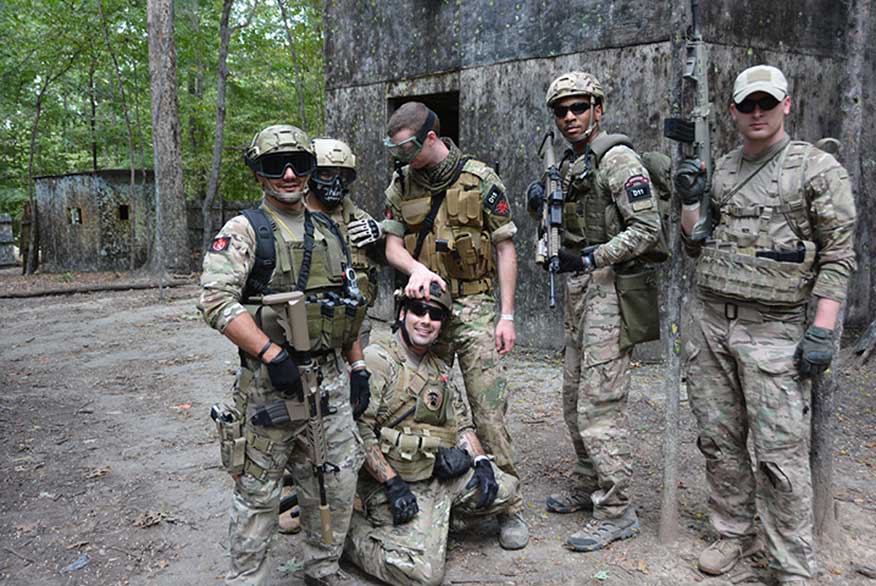 Objective: Team Valkyrie is on the hunt for Captain Kaboozo. To help him stay alive, he has a small force of dedicated warriors. To win the game, Kaboozo must 1.) Eradicate all of the attacking soldiers, 2.) Stay alive until the timer ends, or 3.) Raise the flag at home base.

Directions: After designating a safe zone, Kaboozo and his team get three minutes to take cover before Team Valkyrie goes on the hunt. Kaboozo’s team has one regeneration per person, but Team Valkyrie nor the Captain can regenerate. 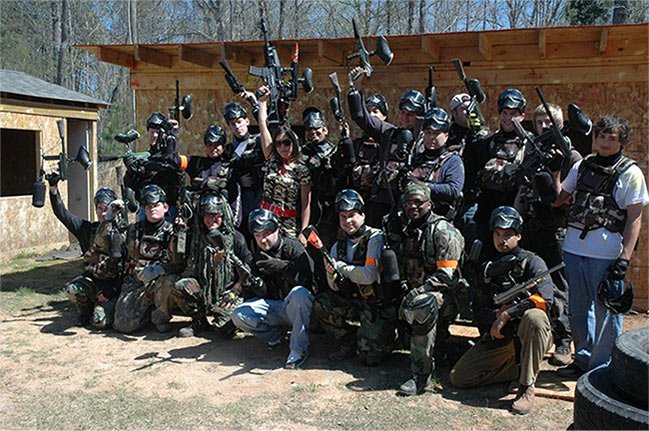 Objective: Team Alpha must eliminate Team Bravo, but Bravo is ready to fight back in this elimination game.

Directions: Team Bravo starts at the center of a field with members facing each other in the circle. Team Alpha has one minute to spread out around the field. Battle starts when the whistle blows.

Directions: Two teams are lined up back to back and must walk forward 50 paces and turn to face the other team. The General instructs the teams to fire, and every player shoots once. Players can duck or lean, but feet must stay in place. Those who are hit leave, those left take a step forward and are instructed to fire again. This continues until the last player standing wins. 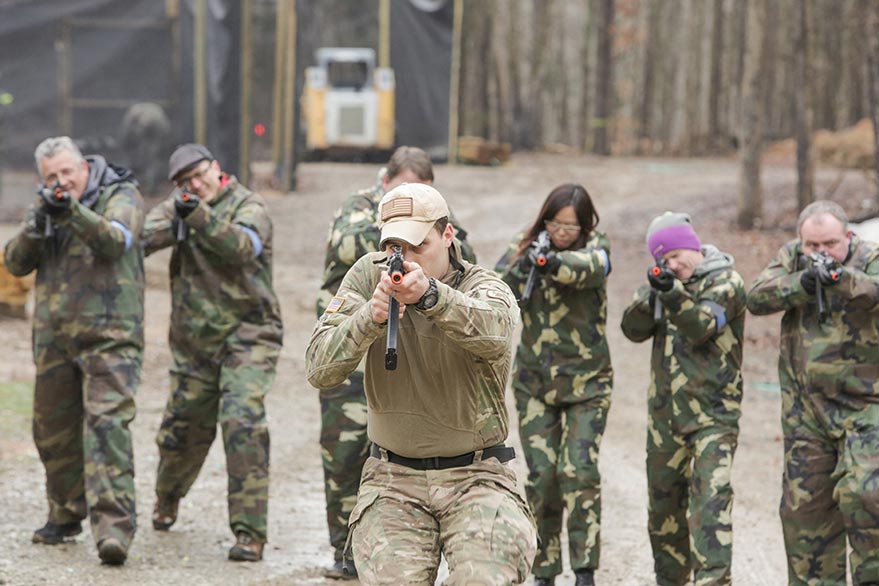 Objective: A VIP is protected by the CIA, but kidnappers have 15 minutes to thwart the CIA, grab the VIP and get them back to the starting point.

Directions: Two teams divide up and one person acts as VIP. The CIA team chooses a spot for the VIP to stand, and the game begins when the whistle blows. The VIP has to survive and can only move when being moved to the kidnapper’s home base.

Alternative 1: If there is not an uneven number of people or no one wants to volunteer to be the VIP it can be done with a BOMB. 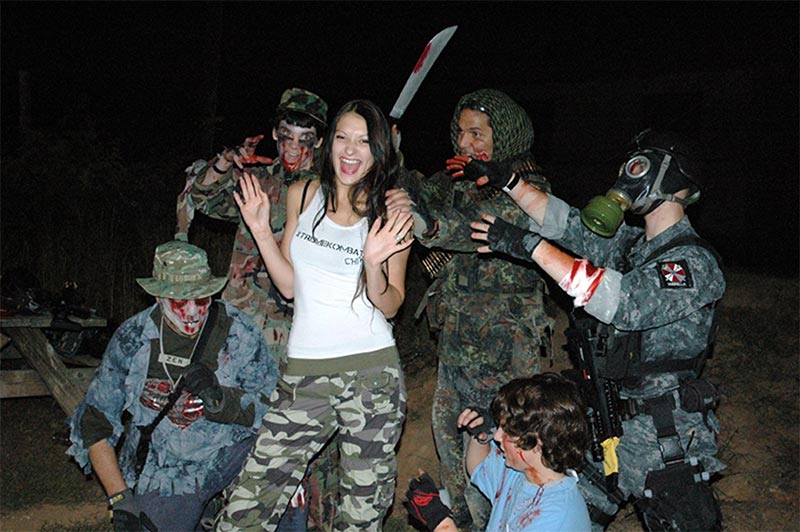 Directions: Humans are marked with arm bands and given three minutes to take cover. When the whistle blows, the zombies attack. If a human is hit, they yell “ZOMBIE!” and remove their armband. Once a zombie, they go to the zombie starting point and start trying to turn more humans.

Objective: Imperial forces must protect their field target from destruction. The Rebel Forces must invade and destroy the field target (any prop designated) by hitting it once.

Directions: Imperial forces get three minutes to set up a defensive strategy before the whistle blows. The field target must be visible, upright and placed by the instructor. The game ends once the target is hit or the time reaches its limit. 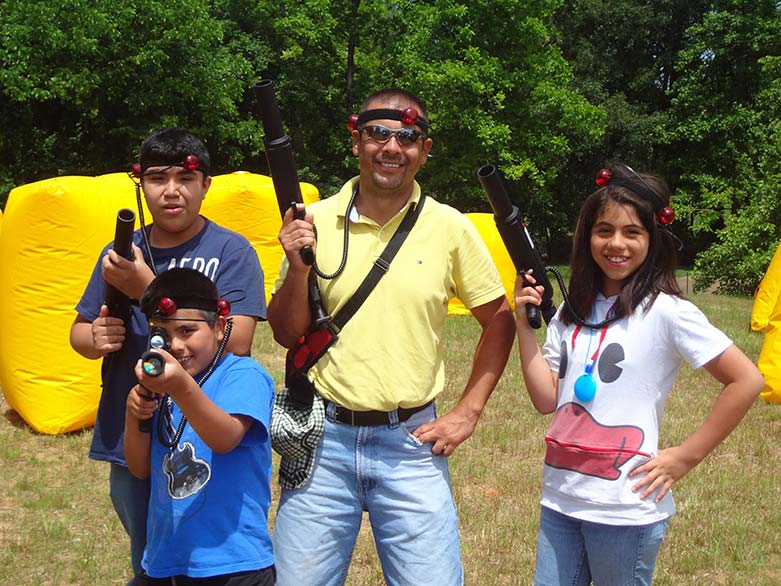 Objective: The horsemen must survive and reach the safe zone before the time runs out. Archangels must stop the Horsemen at all costs. Game ends if one team is eliminated or if one or more horseman makes it through the safe zone.

Directions: Horsemen start on one side, archangels will start across from them at the safe zone. The game will start at the sound of the whistle/horn. Horsemen can only be killed with headshots. Each player has only one life.

The Crazy Game of Poker

Objective: Earn the most points for your team.

Directions: Players are divided into four equal teams for this three-round game. Each team has a captain who proposes how long their team can hold the base. The team with the longest proposed time goes first and the other three teams try to capture the flag. If the defending team holds out the full proposed time, they get all the points. If the attacking teams win, the points are divided among the three attacking teams. 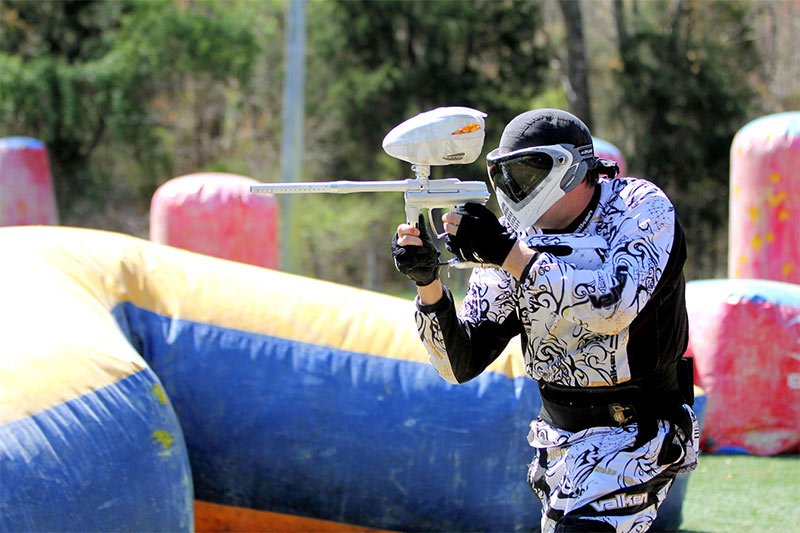 6 players or more. Equal teams.
15-40 minutes depending on number of players.

Objective: Capture the flag in the center of the battlefield and take it to the opponent’s base.

Directions: Teams are divided equally and each team’s mission is to capture the side’s flag.

Alternative 1: You can play with unlimited or numbered spawns.

Alternative 2: Each team gets a medic for every 10 players per team. Once you are hit you must stay where you are until a medic rescues you (you can choose anywhere from 0 – 30 seconds for a medic to rescue you, this has to be predetermined before game starts). If a medic is shot, he loses “medic” status and can no longer heal other players. He may be healed by another medic and become a regular player.

Directions: Terrorists will start by carring a bomb and must plant the bomb at one of two targets within the battle boundaries. Both targets will be identified to all players by the instructor. Both teams will start on opposite sides of the battle boundaries. Game will start at the sound of the whistle/horn. If a player carrying the bomb is shot he must drop the bomb where that player stands. Police force may not touch the bomb. The bomb will be considered armed when an instructor observes a player with the bomb holds the bomb in one of the targeted area for 20 seconds.

Objective: Team Tango is fighting to keep the flag up, Team Echo has to bring it down. When time is up, the team with the flag raised/lowered wins.

Directions: Both teams will start at the opposite end of the battle boundaries at their base. A flag will be in the center of the battlefield. Teams will have infinite re-spawns at their base. Any player touching his base is invincible (to prevent spawn trapping). Bases will not be in view of the flag.
Alternative: No Re-spawns

Directions: Select one player to be Juggernaut who must stand at the center of the field. You can shoot at the Juggernaut to scare and make him/her hide but will not be eliminated. Juggernaut can’t RUN must only walk. All other players are given 1 minute to spread out through the battle boundary. At the sound of the whistle/horn the game starts. Juggernaut will eliminate every one. Last man standing other than the juggernaut is declared the winner.

Alternative: Team Xtreme against the Juggernaut. If team Xtreme is able to lower the flag Juggernaut loses.

Objective: Cpt. America has been tasked to drive his convoy through hostile territory. Him and his troops must follow directly behind the instructor until he reaches his destination. The Xtreme assassins must assassinate Cpt. America at all costs. If Cpt. America dies, his team loses. But if he is able to make it to his final destination, his team wins.

Directions: The XK assassins are told what route Cpt. America will be taking and then are given 3 minutes to set up their ambush. The game starts at the sound of the whistle/horn. Cpt. America and his troops must follow the instructor. They are not allowed to pass the instructor or fall more than 20 feet behind him. 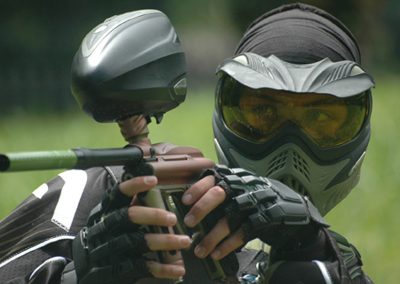 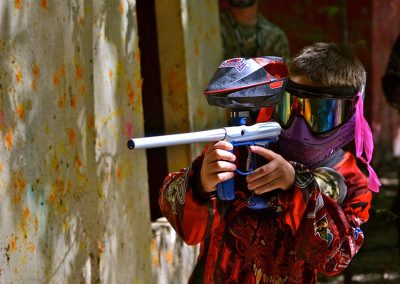 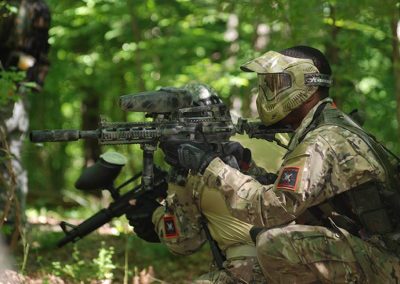 Get Your Group Together for Paintball near Apex Today

Xtreme Park Adventures is the ultimate destination for paintball.